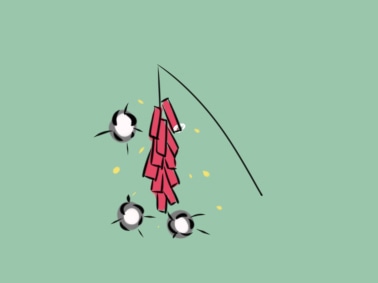 The spring festival is the loveliest in China， which is comes in February. Everyone loves it so much that prepare lots of things of the spring festival before it comes. In the spring festival holiday， people do many things， such as eat the dinner on the New Year‘s， set off fireworks， stroll the famous fair likes “Baiyunguan” fair. Especially for some children or teenager is “lucky money”。

On the first day of lunar， the young generation congratulates the old generation with “Happy New Year!”

The Chinese New Year is now popularly known as the Spring Festival because it starts from the Begining of Spring (the first of the twenty-four terms in coodination with the changes of Nature). Its origin is too old to be traced. Several explanations are hanging around. All agree, however, that the word Nian, which in modern Chinese solely means year, was originally the name of a monster beast that started to prey on people the night before the beginning of a new year.

One legend goes that the beast Nian had a very big mouth that would swallow a great many people with one bite. People were very scared. One day, an old man came to their rescue, offering to subdue Nian. To Nian he said, I hear say that you are very capable, but can you swallow the other beasts of prey on earth instead of people who are by no means of your worthy opponents? So, it did swallow many of the beasts of prey on earth that also harrassed people and their domestic animals from time to time. examda.com

After that, the old man disappeared riding the beast Nian. He turned out to be an immortal god. Now that Nian is gone and other beasts of prey are also scared into forests, people begin to enjoy their peaceful life. Before the old man left, he had told people to put up red paper decorations on their windows and doors at each year's end to scare away Nian in case it sneaked back again, because red is the color the beast feared the most.

The Spring Festival， Chinese New Year，is the most important festival for all of us. All family members get together on New Year'Eve to have a big meal.At the same time， everyone celebrates to each other.At about 12 o'clock，some parents and children light crackers.The whole sky is lighted brightly. We may watch the fireworks excitedly.How busy it is!

On the first early moring of one year， many senior citizen get up early and they stick the reversed Fu or hang some couplets on the front door. Some house's windows are sticked on red paper cutlings.

The Chinese New Year lasts fifteen days. So during the fifteen days， we always visit our relatives from door to door. At that time， children are the happiest because they can get many red packets form their parents，grandparents， uncles， aunts and so on. The last day of the Chinese New Year is another festival. It names the Lantern Festival.

So the Chinese New Year comes to the end.

After the Preliminary Eve, people begin preparing for the coming New Year. This is called "Seeing the New Year in".

Store owners are busy then as everybody goes out to purchase necessities for the New Year. Materials not only include edible oil, rice, flour, chicken, duck, fish and meat, but also fruit, candies and kinds of nuts. What's more, various decorations, new clothes and shoes for the children as well as gifts for the elderly, friends and relatives, are all on the list of purchasing.

Before the New Year comes, the people completely clean the indoors and outdoors of their homes as well as their clothes, bedclothes and all their utensils.

Then people begin decorating their clean rooms featuring an atmosphere of rejoicing and festivity. All the door panels will be pasted with Spring Festival couplets, highlighting Chinese calligraphy with black characters on red paper. The content varies from house owners' wishes for a bright future to good luck for the New Year. Also, pictures of the god of doors and wealth will be posted on front doors to ward off evil spirits and welcome peace and abundance.

The Chinese character "fu" (meaning blessing or happiness) is a must. The character put on paper can be pasted normally or upside down, for in Chinese the "reversed fu" is homophonic with "fu comes", both being pronounced as "fudaole." What's more, two big red lanterns can be raised on both sides of the front door. Red paper-cuttings can be seen on window glass and brightly colored New Year paintings with auspicious meanings may be put on the wall.

People attach great importance to Spring Festival Eve. At that time, all family members eat dinner together. The meal is more luxurious than usual. Dishes such as chicken, fish and bean curd cannot be excluded, for in Chinese, their pronunciations, respectively "ji", "yu" and "doufu," mean auspiciousness, abundance and richness. After the dinner, the whole family will sit together, chatting and watching TV. In recent years, the Spring Festival party broadcast on China Central Television Station (CCTV) is essential entertainment for the Chinese both at home and abroad. According to custom, each family will stay up to see the New Year in.

Waking up on New Year, everybody dresses up. First they extend greetings to their parents. Then each child will get money as a New Year gift, wrapped up in red paper. People in northern China will eat jiaozi, or dumplings, for breakfast, as they think "jiaozi" in sound means "bidding farewell to the old and ushering in the new". Also, the shape of the dumpling is like gold ingot from ancient China. So people eat them and wish for money and treasure.

Southern Chinese eat niangao (New Year cake made of glutinous rice flour) on this occasion, because as a homophone, niangao means "higher and higher, one year after another." The first five days after the Spring Festival are a good time for relatives, friends, and classmates as well as colleagues to exchange greetings, gifts and chat leisurely.

China has 56 ethnic groups. Minorities celebrate their Spring Festival almost the same day as the Han people, and they have different customs.

How time flies! Four moths have passed since we saw each other last time. I cannot help but miss you. You asked me about Chinese Spring Festival. Now I would like to tell you something about it。

The Spring Festival is a Chinese traditional festival. It is the most important and enjoyable one. A few days before the festival, houses are cleaned and red couplets are put up on the doors of every household. They are said to frighten away the ghosts. On that day, people are dressed up. Firecrackers ring out in the air, which adds to the atmosphere of the festival. People after a year’s hard work begin to relax and visit one another. Presents and dinners are given to celebrate the happy reunionof friends and relatives. Families get together. They have jiaozi and enjoy the New Year TV show. Customs may vary from place to place, but the same happy atmosphere is to be found everywhere in the country。

Now, I hope you have some idea of Chinese Spring Festival.

on new years eve，our class had a party. the atmosphere was good. it was out of the ordinary from the very begining. the boy student from one bedroom gave an unusual performance. we saw a boy named li xinmin turn off all the lights in a sudden snap. then with three resounding(响亮的) crow of a cock echoing in the hall，the hall was again brightly lit in a snap.

then，the representative of the bedroom zhu guozhang asked us to guess a line of a poem related to the above situation. he added that li xinmin alone was born in the year of the dog and the other three were all born in the year of the chicken. they left us all in confusion. and it was our monitor who was quickwitted(机智的). he shouted our， "the day breaks as the cock crows three times at dawn." the hall after that，they had another item. this time li xinmin was placed in the middle of the circle. while he was standing there，the other three stood around him，each bowing down to him at an angle of 120 degrees. it was an idiom. this time i got it right："the dog stands out among a group of chickens."

Spring Festival is the most important festival in China .It’s to celebrate the lunar calendar ‘s new year .In the evening before the Spring Festival ,families get together and have a big meal .In many places people like to set off firecrackers .Dumplings are the most traditional food .Children like the festival very much ,because they can have delicious food and wear new clothes .They can also get some money from their parents. This money is given to children for good luck . People put New Year scrolls on the wall for good fortune . The Spring Festival lasts about 15 days long .People visit relatives and friends with the words “Have all your wishes ”. People enjoy the Spring Festival ,during this time they can have a good rest .

Far and away the most important holiday in China is Spring Festival, also known as the Chinese New Year. To the Chinese people it is as important as Christmas to people in the West. the dates for this annual celebration are determined by the lunar calendar rather than the GREgorian calendar, so the timing of the holiday varies from late January to early February.